Kinshasa, 27 May: Legislators Elvis Mutiri and Célestin Engelemba Bokuwe sponsor a bill to institutionalise the System of Environmental Economic Accounting in the DRC 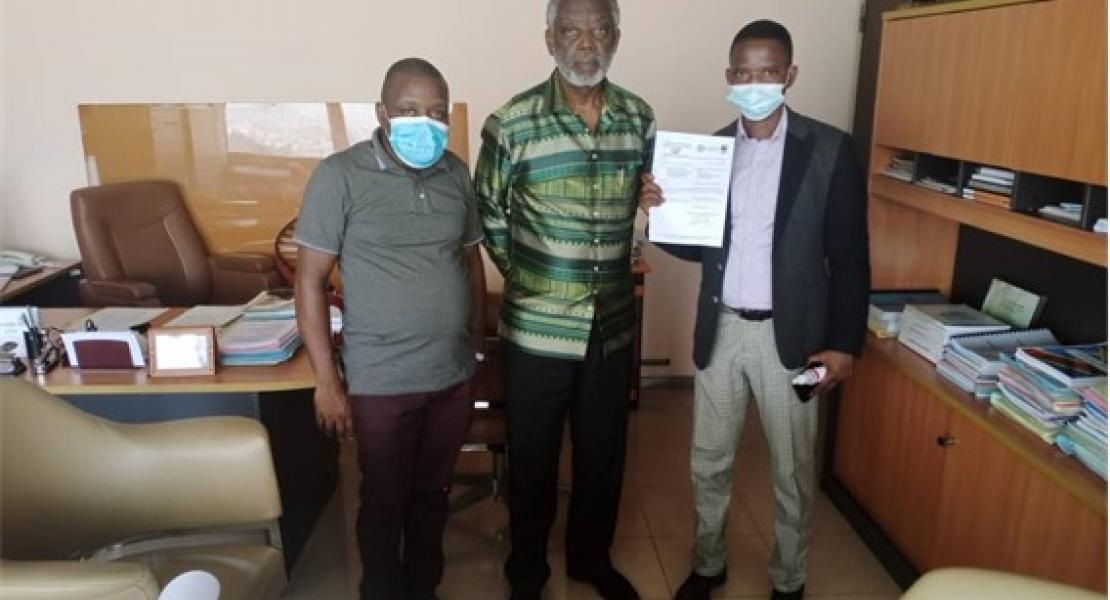 The bill on the institutionalisation of the system of environmental economic accounting in the Democratic Republic of Congo (SCEEC) will be tabled in Parliament before the next parliamentary session, with a view to its insertion in the calendar of the September 2022 session.

This was one of the decisions that came out of the working session that took place on Tuesday, June 28, 2022, in the private office of the national deputy, Elvis Mutiri wa Bashara, between his staff represented by his parliamentary assistant, Me Märio Sengoma Legress, and the team of the national chapter of GLOBE DRC, made up of the assistant of the national coordinator of the GEF6 project, Paul Lukoki, and the communication officer, Edo-Pascal Mulangu.

All parties involved in the process of finalising the drafting of this bill will be mobilised, so that they can work together to achieve the objective of submitting the text before the calendar of the current parliamentary session is drawn up. Hon. Mutiri will then submit the bill to the Bureau of the National Assembly for analysis, after which it will be sent to the Government for an opinion. After this opinion, the Bureau of the National Assembly will include it in the calendar of a parliamentary session and then schedule it on the agenda of the plenary. If the plenary considers it admissible, the law will be sent to a committee. Afterwards the plenary must vote on the report of the said committee. At this point, the law is voted in first reading and sent to the Senate for the second reading, where it will follow the same path from committee to plenary. If it is passed in the Senate with the same terms as the National Assembly, it will be sent to the Head of State for promulgation. If it is voted with different terms, a joint committee of the two chambers will be constituted, adopt a consolidated version, and then send it to the Head of State for promulgation.

The current draft Explanatory Statement of the Bill reads:

“All nations have always kept a close eye on their respective national accounts, using traditional indicators based on income measures, such as Gross Domestic Product (GDP), to assess their economic performance and the effectiveness of their development policies.

However, the conventional method of calculating national income accounts or national accounts has shortcomings.
In the process of producing traded goods and services, the natural environment generates goods and services that are used but not valued in the process of producing goods and services. The benefits of consuming the amenities provided by the natural environment, waste disposal services and pollution are part of the production of marketed goods but are not valued (positively or negatively) and are not reflected in the national accounts.

Indeed, the indicators and standards generated by the system of national accounts are considered vital information for economic management and policymaking. They serve as a basis for socio-economic planning, formulation of development programmes and policy analysis for legislation, among others. It is therefore important that the national income accounts reflect a more accurate picture of the country's economic development and performance. They need to integrate environmental and non-environmental economic inputs and outputs so that policymakers can design appropriate, relevant and effective laws, plans and programmes necessary for national development.

National income accounts are important indicators for determining the level of development of a country. Conventional systems of national accounts measure economic performance by determining the value of goods and services produced in a country and aggregating them into economic development indicators such as gross national product (GNP) and gross domestic product (GDP). The goods and services that are included in this accounting system are those that are "traded", the prices of which are used as the basis for estimating the value that is then included in the calculation of economic indicators. This methodology therefore reflects the goods and services produced, sold, and purchased in the economy.

National Deputy Hon. Elvis Muturi wa Bashara first announced his willingness endorse GLOBE's promoted bill to institutionalise the SCEEC as the lead sponsor of the bill during the working dinner organised by GLOBE International, through its DRC national chapter, on 31 March 2022, in the Gombe commune.

The bill was presented to Hon. Mutiri on 27 May by the GLOBE DRC team. On leaving the office of the Hon., the communication officer of the FEM6 project, Edo-Pascal Mulangu, told the press that this bill was fortunate to be carried by a personality whose profile will facilitate its passing through parliament, that is, its adoption by the two chambers of the Congolese parliament.

"We had the privilege of submitting today the bill on the institutionalisation of the System of Environmental Economic Accounting in the DRC to the Honourable Elvis Mutiri wa Bashara, a senior, high-profile legislator well suited to give decisive momentum to this bill".

He added: "The adoption of this bill by the two chambers of the Congolese parliament, its promulgation by the President of the Republic, followed by its application will allow the Democratic Republic of Congo, our country, to have a system of environmental economic accounting".

Headed by national Deputy Jean-Pierre Tshimanga Buana, the national GLOBE DRC chapter has been advancing GEF6 project activities since January 2020. In parallel, on the same day Hon. Tshimanga Buana submitted the text of the bill to the Secretary General of the Ministry of the Environment and Sustainable Development on behalf of GLOBE DRC as a proposal for an Executive Decree, as a parallel faster ‘second track’ to ensure the adoption of a legal mandate for the construction of environmental economic accounts in the DRC as soon as possible.